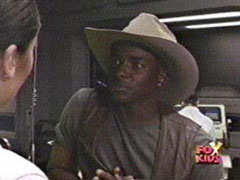 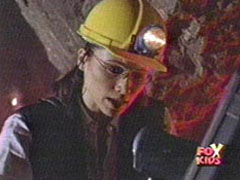 Joel once again tries to put the moves on Ms. F. This time, he is so disgusted with her obssession with work that he simply gives up and walks away.
Ms. Fariweather takes a couple of scientists to the volcano from the last episode to do some tests. They enter a cave and begin taking a few readings. 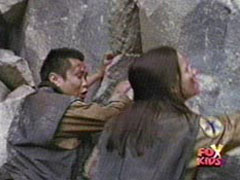 Bansheera resurrects Magmavore, making him more powerful, and as he rises from the volcano, the caves within begin to collapse.
The two assistants make it out safely, but Ms. Fairweather is still trapped inside, and has been knocked unconscious. 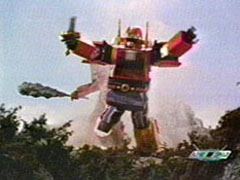 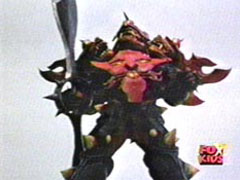 The volcanic duo easily trashes the Lightspeed Megazord, knocking it into a crevice in the earth.
The Rangers abandon Zords to go and save Ms. Fairweather, but they are stopped by Batlings. 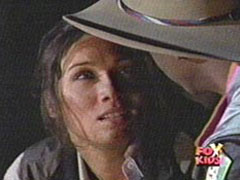 While the rest fight the Batlings, Joel runs ahead to the cave. He blasts the entrance open and rescues Ms. Fairweather.
Ms. Fairweather has a plan - the Rangers reboard the Megazord, now running on backup power, and she races back to the Aquabase.

The Rangers continue their futile battle against the monsters, buying some time until Ms. F. gets back to the Aquabase to initiate her plan.
Ms. F. and the Captain send the Rail Rescues to the battle, and order the Rangers to disengage their Zords and place them into the train. 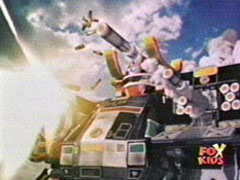 Then, in a spectacular aerial manuever, the Rail Rescues transform and combine into the Supertrain Megazord, which descends from the skies.
The Rangers fire multiple rounds of turbine laser blasts from one shoulder mounted launcher, and rockets from the other, destroying Trifire. 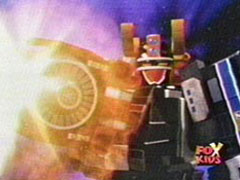 When power surges electrocute the Rangers, they move the launchers to the hands, and fire a second round of shots at Magmavore.
Magmavore goes down, but the danger isn't over yet. His destruction sends fireballs flying towards the volcano, which set it off. 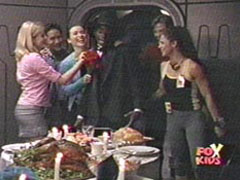 The Supertrain Megazord takes care of it with a couple of freeze blasts, which put the volcano on ice.
A lovelorn Joel is invited to dinner by Ms. Fairweather. But to his surprise, he finds the others there as well.
Comments:
Posted by Admin at 1:22 PM