Captain Mitchell tells the Rangers the story of how his son was lost in a car accident. On a rainy night, as he is driving Dana and Ryan home, an oncoming truck causes him to veer off the road. The car falls off a cliff, but Captain Mitchell jumps out with the kids, and hangs on to a root.
As Ryan hangs on his dad's shoe, Diabolico appears and offers to save him in return for keeping him. Ryan slips and falls. As he plummets, his father accepts the deal, and Diabolico rescues him. He takes Ryan with him, and tells Captain Mitchell that he won't see him until his 20th birthday. 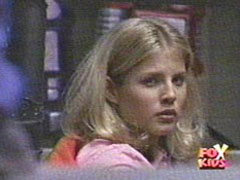 The Rangers race to a viewscreen when the alarms sound - Titanium Ranger has returned! The look for the Captain, but he is nowhere to be found.
As the Rangers discuss their next course of action, Dana sneaks off in the Rescue Rover, to try and take care of matters alone.

Ryan conitnues his rampage through the city. He takes aim at a civilian and prepares to fire.
But Dana steps in and deflects the blast. She begs for Ryan to stop, but he just wants to fight.

The siblings begin their battle, and Dana is overtaken by her brother's Titanium powers.
Just as Dana is about to get it, the Rangers arrive to help. The Titanium Ranger flees.

They try to follow Ryan, but a monster appears. The rest of the team morphs, and begins fighting the monster.
The Rangers summon the Rescuebird, configure it to Unilaser mode, and blast the monster into pieces.

Jinxer brings the monster back with one of his cards, and this time powers him up as well.
The Rangers call the Rail Rescues, and destroy the monster with the Supertrain Megazord.

Captain Mitchell finds his son sulking by the cliff where the accident took place. He tries explaining everything to him, but Ryan tackles him, and they both fall off the cliff.
Just like before, Captain Mitchell hangs on to the root, as Ryan hangs on to him. Ryan has a flashback, and remembers everything. Knowing the truth behind the incident, he pulls himself up.

The root is giving way, so Captain Mitchell lets go and drops to save Ryan. Ryan dives after him, morphs, and catches him.
Ryan takes the brunt of the impact as they hit the ground, and Captain Mitchell is saved. Ryan demorphs, but he is uninjured.

Ashamed at all that he has done, Ryan straps off his morpher, drops it to the ground, and walks away.
He then tells Diabolico where he can stick his staff, and leaves the Skull Cavern, turning away a life of evil.
Comments:
Posted by Admin at 1:22 PM