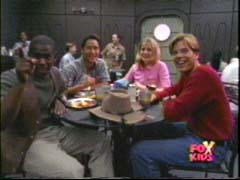 Carter trains in a simulation, where he fails to master flying the new mobile armor vehicle, which he will test drive tomorrow.
The morning before going live with the mobile armor, a few memorable things occur - Dana's stupid joke, and Kelsey's accident with a chef. 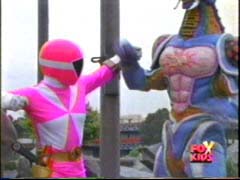 Carter takes off inthe mobile armor vehicle, but the engines malfunction, forcing Carter to land.
Amonster attacktakes the Rangers to the city, where they battle Olympius and his Batlings as well. 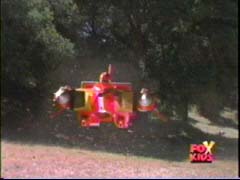 When Carter hears of the attack, he finishes the repairs and takes off to help his teammates.
Chad summonsthe Rescuebird, but it isintercepted by Olympius, who opens fire on the Rangers with it. 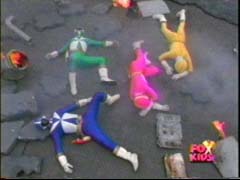 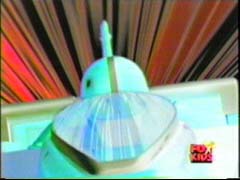 The Rescuebird blast kills all four Rangers!
As Carter screams over his friends' demise, a time warp sucks him in. 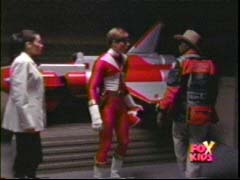 In a split second, he finds himself back at the simulator, where Joel and Ms. F give him the same talk as before.
The next morning during breakfast, Carter predicts both events. He answers Dana's riddle, and prevents Kelsey's accident. 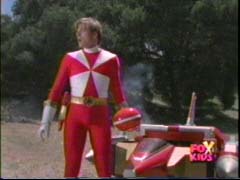 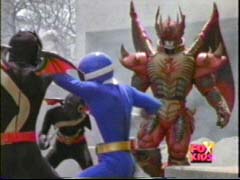 Once again, the test drive is a bust, and Carter crash lands. He realizes the day has repeated, and makes the repairs and takes off in a hurry.
The monster attack happensagain.The Rescuebird is still summoned, and Olympius still intercepts it. 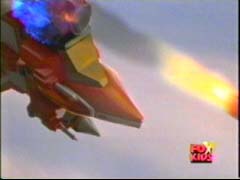 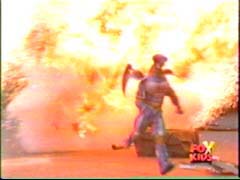 But before Olympius can use it on the Rangers, Carter appears and blasts at him and the monster.
Olympius loses the Rescuebird, and the monster is destroyed by a missile blast from the mobile armor. 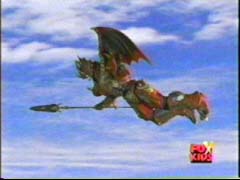 Olympius goes up, up, and away, and flies after Carter, but is left eating dust by his daredevil manuevers.
By the time Carter returns from the skies, the monster has been revived and turned into a giant. 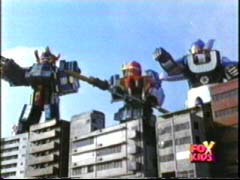 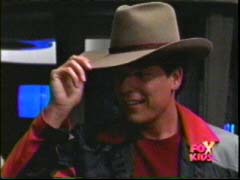 The Rangers call on not one, not two, but three Megazords to take out the overgrown mantis.
Back at the Aquabase, the Rangers give Carter his very own cowboy hat, making him a sky cowboy.
Comments: