Danny and Max take Alyssa out for ice cream to cheer her up. Danny has to rush home to water his plants.
At the bus stop, Max and Alyssa see the bus running out of control.

They morph and go after it on their Savage Cycles.
Alyssa jumps into the driver's seat and gets the bus under control.

Toxica and Jindrax board, and demand the Giraffe crystal in exchange for the safety of the passengers.
Max tosses the crystal out the window to get rid of them, and evacuates the passengers.

The bus turns into Bus Org, and attacks.
Max and Alyssa do their best to fight the Org.

The other Rangers race to help their allies on the Savage Cycles.
They are stopped by a familiar face - Zen-Aku.

Cole keeps him busy while Danny and Taylor keep going.
They run into Toxica and Jindrax, and fight them for the Giraffe crystal.

In the struggle, the Giraffe crystal falls into the ocean.
Reluctant at first, Danny takes a dive into the water and retrieves the crystal.

Zen-Aku nearly kills Cole, but retreats after Cole blocks his finisher.
Danny and Taylor meet up with the other two, and give Max his crystal.

When Bus Org is turned into a giant, the Wild Force Megazord destroys him with the Soul Cannon.
Zen-Aku comes back, ready to show everyone how it's really done. 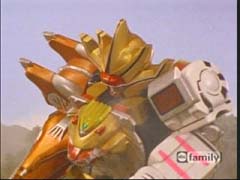 He summons his Zords, and for the first time, combines them into the Predazord.
The Rangers try Spear mode, but all of their attacks are useless against the Predazord. 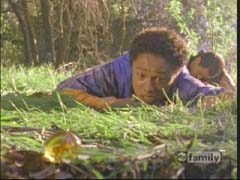 Predazord ends it with a whopper - the Predator Wave.
The blast blows apart the Megazord, and sends the Rangers hurling to the ground unmorphed.

Zen-Aku picks up the exposed Giraffe crystal, and adds it to his collection.
Later that night, Master Org confronts Zen-Aku, and is pleased to discover that he does not remember him.
Posted by Admin at 1:22 PM