Elsa and the evil White Ranger moniter their plans from the Island Fortress.
Just then, the Rangers show up to foil their plans.

The evil White Ranger shows up with the Tyrannodrones to stop them.
The Rangers are able to get the best of him and destroy the villains' laser beam.

Later, Kira catches Ethan and Cassidy together.
Ethan tells Kira that he and Cassidy are just friends, and that she should take the time to get to know her.

Kira talks Edward Cormier, the television station manager to interview Cassidy for a reporting job.
Mr. Cormier is hesitant, but gives Cassidy an assignment on a sheep farm.

On her way out, Kira encounters the Tyrannodrones.
Mesogog sends Jupitor to act as a virus and infiltrate the TV station's satellite dish.

Jupitor completely overtakes the station's computer systems.
Tommy sends the other Rangers to handle the situation.

It appears that the villains are using the satellite dish to penetrate Jupiter's atmosphere in an attempt to destroy it.
The Rangers race to the TV station.

Trent, Ethan, and Kira are intercepted by Elsa and the Tyrannodrones.
Meanwhile, Cassidy tries to get her story, but ends up with her face in the mud. 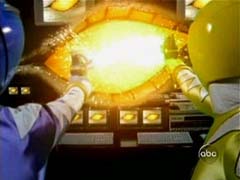 The Triassic Ranger takes on the White Ranger in his Triassic Dimension.
Meanwhile, the Blue and Yellow Rangers force the virus out of the system by blasting it.

The Triassic Ranger uses the Shield of Triumph to finally defeat the evil White Ranger.
Cassidy and Devin just happen to be walking by when they see the ongoing battle.