The Shadow Ranger owns the Red Ranger in a sword fight.
Jack tries to insist that Cruger let him use the Shadow Saber, but Doggie assures him he wouldn't stand a chance.

Emperor Gruumm reveals that he has opened a time portal and brought an alien samurai from the past.
Hundreds of years ago, Katana's ship crash lands in Kyoto Japan, where he is found and nursed back to health by an ancient samurai.

The samurai trains Katana to become the greatest samurai in the history of Japan.
Meanwhile, Bridge is using his psychic abilities to read minds, but the others think he's lost it. 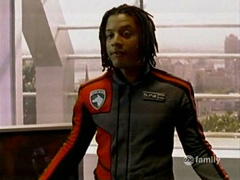 Jack complains that he could've beaten Cruger if he had let him use the Shadow Saber, and that's why he wouldn't let him use it.
The Rangers are alerted Gruumm bringing Katana to the present, and Doggie sends them to Kyoto, Japan.

Bridge uses his psychic abilities to track Katana.
Katana is confused by the changes to Kyoto and begins attacking cars thinking that they're armored dragons.

The Power Rangers show up to put an end to Katana's attack.
Katana says he won't fight an unarmed opponent and gives Jack his blaster back after he drops it.

Broodwing sends Krybots to assist Katana in defeating the Rangers.
Broodwing convinces Katana that the Power Rangers are trying to take over Kyoto, and asks him to destroy them.

The Power Rangers show up to fight Katana on his ancestors' ground.
Doggie and Kat bring Delta Command to Japan at hyperspeed when they are alerted to a giant robot attacking.

The Delta Command Megazord defends Kyoto against the giant robot.
The Red Ranger goes after Katana, but first insists that Cruger gives him the Shadow Saber. He gives in.

Meanwhile, Gruumm uses this oppurtunity to have the Krybots rob the Newtech City Iridium Plant.
The Red Ranger faces off against Katana to prove that he is honorable.

Just to make sure, the Red Ranger uses Judgement Mode to find that Katana is innocent.
Kat informs the Jack that the time portal has reopened and Katana uses it to return home.

Although unknown to Jack, something else comes out of the time portal and follows him.
Cruger reveals that the Shadow Saber he gave Jack was a fake, and that it is truely the swordsman, and not the sword that makes a difference.
Comments: