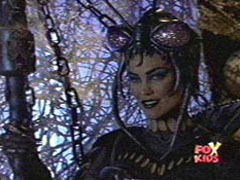 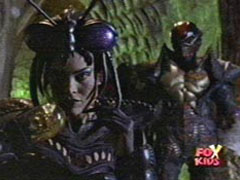 Trakeena has the cocoon taken to storage, much to Deviot's dismay. She is powerful enough without it now, but who knows what the future may hold.
As Trakeena mourns the loss of her father, Villamax appears with news of Leo's whereabouts. Trakeena immediately dispatches her forces. 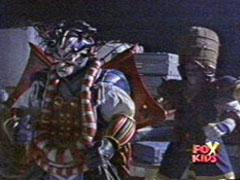 Deviot hires two monsters to kill Trakeena. Kegler interrupts, and has him join Villamax in finding Red Ranger.
Leo and Kai are training in the woods, when they are attacked by Villamax. They morph, and the battle ensues. 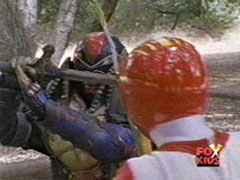 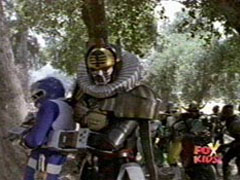 The two Rangers are no match for Villamax. He takes Kai out when he tries to radio for help, and gains the upper hand in battling Leo.
Deviot appears with a surprise - all of the Rangers, captured! Leo must surrender himself, and the Rangers will be released. 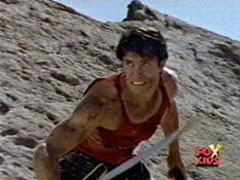 Leo accepts, and he is taken away by Sting Wingers. Villamax keeps his word, and releases the Rangers.
Leo is taken to the Scorpion Stinger, stationed on a planet. He manages to escape, and take his Saber and Morpher back.

After sending Villamax off on a wild goose chase, Deviot sends Trakeena to the true location of Leo.
She catches up to him, and sets a force field up around the two of them, so that they may battle one-on-one. 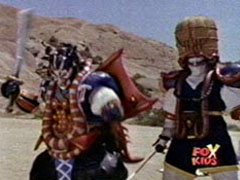 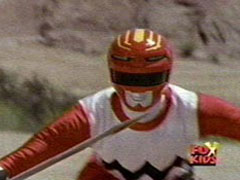 Deviot destroys the force field, and sends his two monsters in to kill Trakeena, and make it seems like Leo was the one responsible.
Trakeena expertly battles the two would-be assasins, giving them a run for their money. Leo takes the opportunity and escapes. 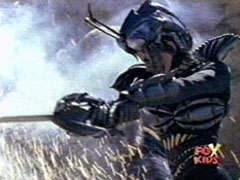 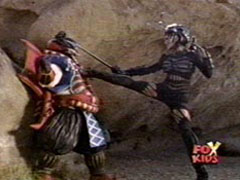 Trakeena is not easy to defeat, and destroys one of the monsters.
She has the other on the ropes, and demands to know who sent them. 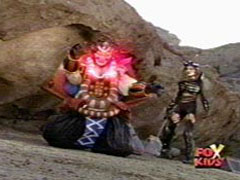 Before he can answer, Deviot blasts him, and and tells Trakeena that he had thought she was in danger.
With Trakeena hot on his trail, Leo is joined by the rest of the team, who have arrived in their Jet Jammers. 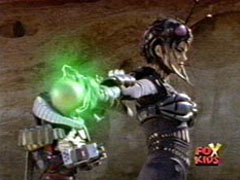 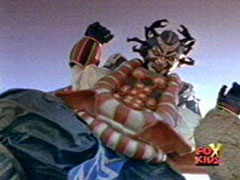 Trakeena blasts the Rangers, flooring the whole team. With the weakened heroes in her sights, Trakeena powers up to finish them off.
She is interrupted by the monster she had thought dead, who is now super-sized, and attacking everyone in sight. Trakeena retreats, and the Rangers take the offensive. 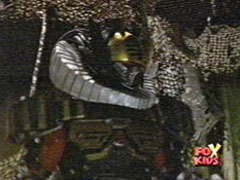 The Rangers summon the Galaxy Megazord, and they finish off the monster witrh a Condor missile.
Villamax praises Deviot for his "bravery", but as he leaves, Deviot shows a glimpse of his true intentions, which is overheard by Kegler.
Comments: