Kids find out who made it to the soccer team.
Roger didn't make it to the team.

Ernie agrees to a second tryout.
Finster works on charging the Soccerdillo. 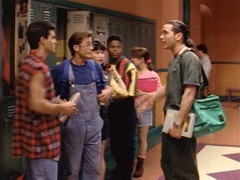 Tommy thinks he got called by Zordon. He clarifies it wasn't him.
Tommy's communicator keeps beeping and interrupting class.

Putties arrive and seem to be waiting.
The putties play soccer with the Soccerdillo.

Jason and Zack avoid the rolling ball and try kicking it.
Trini, Kim and Billy get contacted while talking to Ernie.

Trini stays with Roger as the others fight the foes.
The villains retreat.

The five Power Rangers morph and fight the Soccerdillo in its monster form.
Tommy contemplates taking his communicator back without Ms. Appleby when she arrives.

The Rangers' tower formation can't crack the shell of the monster.
Putties kick rocks at the Rangers.

Tommy has his communicator back but it doesn't work.
Alpha is able to get through and he morphs.

Soccerdillo is beaten and made to grow and fights the Megazord and Dragonzord.
Dragonzord delivers a blow, it becomes a ball and smacks the two.

Power Sword is called and destroys the monster.
Roger made as captain to the second team.

Skull has slimy stuff in his hands and is given the ball.
Skull throws the ball and it smacks both him and Bulk down.
Comments:
Posted by Admin at 1:22 PM