Scorpius is frustrated at the disappearance of Trakeena and demands that Deviot find her. Deviot isn't too fond of this idea, and devises a plan to have Scorpius destroyed.
Trakeena is wandering on an alien planet, and goes in over her head when she picks a fight at the Onyx Bar. A stranger named Villamax comes to her rescue, and offers to train her. 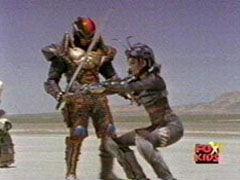 Trakeena accepts, and Villamax puts her through grueling exercises which give her strength, speed, and fighting ability.
Deviot goes to Terra Venture, and fools the Rangers into heading towards the warehouse on dome five, by announcing a bogus plan. 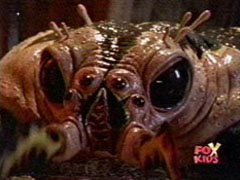 The Rangers fall for it, and they take off for the warehouse, where they believe Deviot is planting a bomb.
Deviot also tricks Scorpius into going to the warehouse, by telling him that the Rangers are holding Trakeena prisoner there.

The Rangers and Scorpius meet at the warehouse, and fight. Deviot's plan is going perfectly.
The Rangers power up with the Lights of Orion, and Leo mortally wounds Scorpius with his saber. 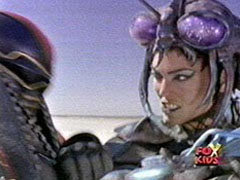 Scorpius explodes, and de-materializes. It apears that he has been destroyed. The Rangers rejoice at their victory.
Trakeena continues her training. She has made incredible progress, and has become a proficient warrior in no time. 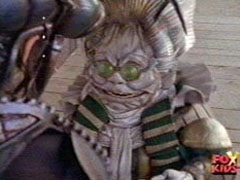 She returns to the Onyx Bar to settle an old score with the patrons.
Kegler tells Trakeena that he heard that Scorpius has been in a battle, and is badly injured. 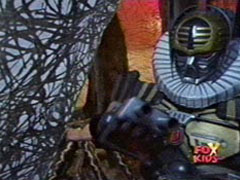 As he dies, Scorpius asks Deviot to enter the cocoon and take his place on the throne of the Scorpion Stinger.
Deviot doesn't get to enter - Trakeena appears. She makes peace with her father just before he passes away.

With newfound confidence and power, Trakeena vows to destroy those who killed her father - the Power Rangers.
The Rangers relax, beleiving their problems to be over, but Maya senses that a greater evil has replaced Scorpius.
Posted by Admin at 1:22 PM