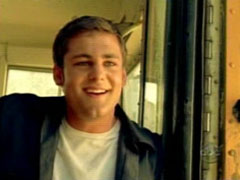 Three years ago the Venjix computer virus has taken over the world and has made it a wasteland. A message has been sent out about the city of Corinth, the last hope for safety and everyone rushes into it before the dome closes.
Colonel Truman is briefed by Corporal Hicks that the forces are closing in. A Scottish man by the name of Flynn arrives on a bus full of people, returning a little girl to her mother and Truman scolds him for using one of the military's buses. 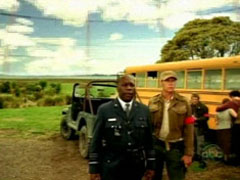 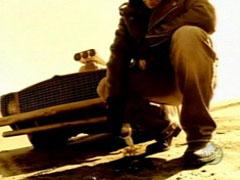 Scott and Summer barely make it into the city, which activates an atificial sky in the dome. Scott (Eagle 2) report to Colonel Truman that Eagle 1 is dead, Truman is upset and doesn't want to discuss it to his wounded son.
One year later, the dome is closed and a mysterious man with a muscial pocket watch protects a flower from footsoldiers and beats them up. He is assaulted by Ziggy, claiming to shoot him in order to steal the car and go to Cornith. 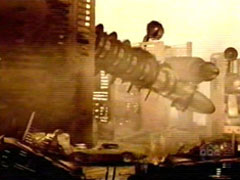 It seems there has been radiation because the compasses don't work. Ziggy and the mysterious individual, who at first claims to not know his name or anything except for cars, fight off robots and explosions as they zip into the dome.
They must keep running because the car is almost out of gas and if Dillon shuts off the car... he won't be able to restart it again. They destroy the Venjix technology in front of the gate. Dr. K tells Truman to lower the shield and the car enters. 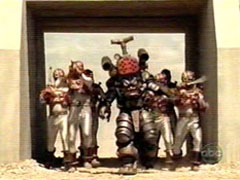 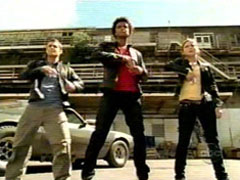 Venjix releases an attack robot and it enters the city, the Rangers are sent, we are reminded of the three individuals we meet before. They are bus driver Flynn is Blue, the pilot Eagle 2 is Red, and Summer is
Yellow. They morph and Ziggy is excited to see the Power Rangers. Yellow deflects the bot from attacking the two. They enter the warehouse to face the attack bot. Dillon asks what Power Rangers are.
Comments:
Posted by Admin at 1:22 PM