The Rangers are in their Megazord fighting an Attackbot and it makes an oil spill making it slippery. They are split apart. They make ValveMax and High Octane and destroy the monster.
At the evil lair, Venjix uploads himself in a new body and plans for the Rangers to come to him. Back at the garage, Summer hypnotizes Dillon to get more answers from his past.

Dillon berates Dr. K for unleashing the virus but it seems everyone else has forgiven her. He is hypnotized with his musical clock and is in front of the Venjix pole.
He sees himself with a woman in a place called Kenmore. So he wants to go there. They find out Kenmore is far away from Corinth but the Rangers want to go anyway. Colonel Truman is against it. 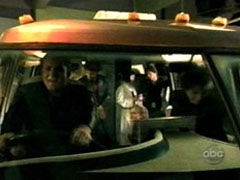 But Scott tells him he is going to go regardless. So the team is on a road-trip in an old van, Ground Outdoor Operational Network General-Purpose Explorational Rover, belonging to Colonel Truman.
It was supposedly built in the 70's. They lower the shields and heads off, only to in counter Venjix himself and a barrage of Grinders, who he powers-up. They destroy the Grinders.

Dillon recognizes Venjix's voice. Venjix reveals his identity. Then Venjix attacks them all with his main chest weapon. They all de-morph. Venjix calls for his ship.
The five run in the bus. The ship chases the bus. Venjix leaves as the Rangers stay in a tunnel. It is Scott's call and they form Zenith Megazord.

Venjix comes in his ship and blasts at them. They split into their six zords and go 'airborne' which means they all give Red a boost to fly and attack the ship. The ship splits into five.
Then out of the mountains, two new Zords appear. The two Zords attack the bad guys. We hear familiar voices. Venjix is surprised and shocked. Gold asks Silver if she is hungry, she says she is starving.

The other ships are destroyed. Ziggy is impressed. Flynn wants to know who they are. The two generals fret over the death of Venjix, Tanaya thinks she should be the new leader, the three fight for the job.
Tenaya thinks there should be a fair way to figure it out but Tenaya beats the other two up but Venjix arrives in his pole, saying he is immortal and brings in a new copy of the same body and enters it once again.
Comments:
Posted by Admin at 1:22 PM