Machine Empire forces have gathered on Earth's moon. An army of Cogs digs up the evil Zord, Serpentera.
They are being spied on by Andros, the Red Space Ranger, sporting his signature cloak.

He is spotted after making some noise, but he manages to escape on his Galaxy Glider.
At Bulkmeyer's, Bulk and Skull talk about old times while playing Psycho Ranger chess. The phone rings. 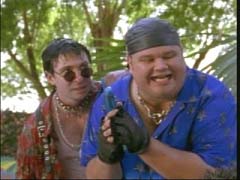 They nervously pass the call on to a mysterious stranger sitting poolside.
Wild Force is approached by Carter Grayson, Red Lightspeed Ranger. He asks Cole to come with him for a special mission.

Carter and Cole go to a NASADA space port, where Eric and Wes have already arrived.
They are joined shortly by Theodore J. Jarvis Johnson, the Red Turbo Ranger. "Please, call me TJ."

Andros arrives, and tells them that they have all been gathered by a veteran Ranger for a special mission.
In walks Tommy Oliver, Red Zeo Ranger. Heexplains to them that Machine Empire forces have survived.

Under the command of General Venjix, they are amassing their forces on the moon, preparing to invade Earth.
When Cole asks how they are getting to the moon, Andros unveils the Astro Megaship mark 2.

The eight heroes march to the Astro Megaship and take off for the moon.
Venjix gives a speech to his troops about avenging King Mondo.

On Mirinoi, Leo pulls his Quasar Saber from the stone, ready for action.
The Rangers gather on the Megaship, along with Alpha 7. They are told of the Machine Empire'shistory, as well as their plans to dig up Serpentera.

With Serpentera dug up, and a new power source in place, Venjix and his soldiers prepare to board it.
The Red Rangers storm the place and tell Venjix where to stuff it. He sends the Cogs to attack them.

Wes snags a Cog weapon and uses it against them.
Cole shows off his monkey style fighting techniques.

With the Rangers occupied, the Machine warriors go to Serpentera.
Cole breaks away from the fight to stop them, but the Machines open fire.

Cole is saved just in time by Leo and Aurico, who fly in on a Jet Jammer.
The other Rangers come out after defeating the Cogs.

They all morph, ready to kick some serious Machine butt.
Cole and Jason team up to take on General Venjix.

Jason shows the rookie how it's done with a corkscrew kick.
Tommyand Wes take on the mean green machine Gerrok.

Tommy finishes him off with a Zeo Power Kick.
The femme bot of the group, Tezzla, fires at Aurico and Eric.

They take her down by joining their weapons and firing.
Leo flies up from a cloud of smoke and slashes the Machine warrior.

TJ destroys him on his way down with the Lightning Sword.
Andros and Carter take on the blaster weilding Steelon.

They expertly dodge, and use their blasters to knock him off a cliff.
Battered from the fight, Venjix runs off and boards Serpentera.

He takes to the skies in the gigantic Zord. Jason suggests that they head to the Megaship.
Carter says there isn't time, he must be stopped before be reaches Earth. The rookie has an idea.

Cole summons the Wild Rider, and flies off after Serpentera.
Serpentera mouths off at the Wild Force Ranger.

Cole bobs and weaves on his ride, avoiding the blasts.
He charges right at Serpentera as it fires, and is able to withstand it.

He continues flying into its mouth, pushing the blast back into it.
Venjix screams in anger as Serpentera blows up around him.

As Cole emerges from the explosion, Jason congratulates him. "I gotta admit, you did well rookie."
Back on Earth, Tommy thanks them all for helping to save Earth. "May the power protect you."

Cole watches in awe as Tommy leaves. "He really is the greatest Ranger."
The others laugh at him, and try to outdo each other by bragging of their own exploits.
Comments: