While practicing on the track, Dustin is joined by two mysterious bikers.
After the run, he meets them - Hunter and Blake.

Late for training again, Dustin is attacked by Kelzacks.
Shane and Tori come to the rescue on the new Tsunami Cycles.

Dustin begs Cam to give him his cycle, but Cam pretends that he doesn't have one for him.
He calls the Mobile Command Center, which opens up to release Dustin's Tsunami Cycle. 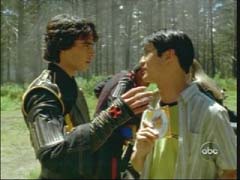 He takes the bike and starts beating up on the Kelzacks.
After the fight, Cam gives Dustin a CD with the cycle specs to look over.

On Lothor's fortress, the Thunder Rangers have another altercation with Zurgane, before being sent off to plot against the Wind Rangers.
The Terra Mole is unleashed on the city, causing seismic disturbances as he burrows underground.

The Rangers morph and catch up to him, but he escapes by digging.
Later on at Storm Chargers, Dustin introduces Blake and Hunter to the other Rangers.

Shane chews out Dustin for being irresponsible, and criticizes his choice of friends in Blake and Hunter.
Dustin bails, and goes back to the track. When Terra Mole attacks again, he rushes off.

In his haste, he leaves his backpack, which is taken by Blake and Hunter.
He arrives at the battle just in time, and plays whack-a-mole.

The team destroys Terra Mole with the Storm Striker.
But he is revived and enlarged by Kapri and Marah.

To keep up with his speed, the Rangers use the Storm Megazord in Lightning Mode.
When that's still not enough, Cam sends them Power Sphere 2.

They destroy Terra Mole with the Ram Hammer.
Dustin takes his teammates to the track, so they can get some biking practice to master the Tsunami Cycles.
Comments: