Sky is working in the Command Center late at night.
But R.I.C. keeps bothering him, because he wants him to play ball.

The alarms sound and the Rangers respond to the emergency.
The Rangers form the Delta Squad Megazord to battle another giant robot.

The robot is trying to escape, when the Rangers stop it with the Delta Command Megazord.
The Rangers bring Wootox the Destroyer of Planets in for questioning.

Sky is taking Wootox to his cell when Wootox uses his power to switch bodies with Sky.
By morphing into the Blue Ranger, Wootox removes the translator device around his former body's neck and throws him into the prison cell. 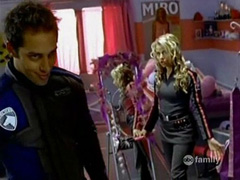 Wootox disturbs Syd when he barges into her room while searching for the cockpit for the Delta Command Megazord.
Wootox suggests that they get rid of the criminal as soon as possible. Just then the alarms sound reporting Sky's escape.

Wootox busts into Kat's lab demanding her to tell him the location of the cockpit.
Commander Cruger shows up and figures out that Wootox is not really Sky. The Shadow Ranger and Blue Ranger battle.

Sky figures out Wootox's plan, but has to find a way back inside the Delta Base, given that he's in the body of a wanted criminal.
The other Rangers stop Sky from gaining access to the Delta Base, but he is determined to stop Wootox.

Just then, Sky comes in to stop Wootox and throws him out of the Megazord.
Sky is about to destroy Wootox, but sacrificing his body to do so, but the other Rangers stop him and turn their weapons on Sky.

The Shadow Ranger shows up just in time to stop them, warning them of the body switch.
Wootox claims that they switched back, but Jack has an idea. He throws the ball to R.I.C.

R.I.C. returns the ball to the real Sky, and Wootox loses his composure.
The other Rangers hold down Wootox as Sky takes his body back.

Sky morphs into the Blue Ranger and joins the team to take down Wootox.
The Rangers fire the Canine Cannon and contain Wootox once and for all.

Later, Sky promised R.I.C. that he'd play ball with him until he gets tired, but Bridge points out that R.I.C. won't ever get tired.
Sky accidently breaks something and the two of them run out of the room and down the hall.
Comments:
Posted by Admin at 1:22 PM