Koragg has the Rangers down for the count.
He merges with a giant steel stallion named Catastros to become a powerful centaur.

Becoming the White Ranger, Udonna uses her magic to grow in order to combat the Knight Wolf. The two sense a farmiliarty about each other.
Koragg uses his dark power to defeat Udonna, which causes it to snow.

Clare notices the snow and senses that Udonna is in trouble.
Koragg picks up Udonna's Snow Staff that has fallen to the ground - and is the source of her Ranger magic.

Morticon tries to secure the Snow Staff for his own, but Koragg refuses to give it up.
Udonna finally turns Clare back to normal and tells the Rangers not to go anywhere without their wands.

Udonna transforms them into Mystic Morphers, which will be more to their generation's liking as they are in the form of cellphones.
Udonna tells the Rangers to let the trees be their guide through the forest. They soon find they can travel through the trees.

The Rangers teleport through the trees by thinking of the tree outside of the record store, which teleports them directly to it.
Madison tries to convince Nick to stay in Briarwood and help, but he's intent with moving on with his life.

Meanwhile at Rootcore, Clare questions Udonna's decision to give up on Nick. Pointing out how she was patient with her own screwups.
Udonna tries again to reach out to Nick and tells him that his being the first to help the old man showed her that he was destined to be the leader.

The Rangers are called into battle and as they reach the forest, they realize they have new uniforms.
The Rangers are soon faced by the Hidiacs and get ready to take them down.

"Magical Source, Mystic Force!" Using their Mystic Morphers, the four transform into the Power Rangers.
Nick recieves a vison that the other Rangers are in trouble and rides to their rescue - delivering Koragg a flying kick to the shield.

Finally believing in magic, Nick's magical power awakens.
Nick morphs into the Red Ranger and uses the power of fire to bring down the Hidiacs. 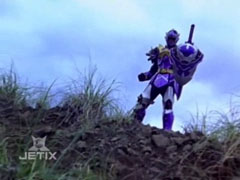 Koragg threatens the Rangers that this is the only beginning and they will meet again.
The five Power Rangers are finally united together in an effort to protect both dimensions from evil.

Later at the Rock Porium, Xander, Madison, Chip, and Vida use their magic to clean the store.
Toby is shocked to find the store clean. They are soon greeted by Leelee - a new girl in town who is looking for help.

Xander and Chip instantly both rush to help, but they don't seem to be the ones she's interested in.
Leelee wants Nick to help her and much to his dismay, the other Rangers convince Toby to hire him.
Comments:
Posted by Admin at 1:22 PM